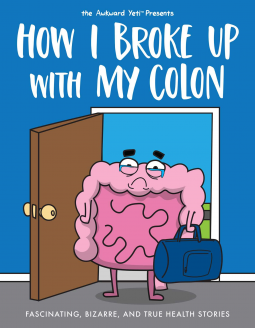 I’ve always been a rather huge fan of Nick Seluk’s Heart and Brain comics and, in my exploration of those comics, I happened upon his colon comics. One of my all-time favorites of Seluk’s work is a comic strip in which he depicts everything from brain, heart, tongue, and yes, colon’s reaction to spicy food. And it was hilarious. I’ve been pretty sold on these books and comics ever since.

How I Broke Up with My Colon by Nick Seluk wasn’t quite as focused on humorous commentaries about the colon as I was expecting, but it did detail a number of strange medical stories that have happened to people he knows. In true fashion of Seluk’s work, much of it was quite amusing and a portion of it was at least somewhat relatable.

I do think that Seluk’s best work comes from the ideas that are relatable, which leaves this particular work of his a little less than the rest of his stuff. That said, I did really enjoy it overall as a read. While I’m definitely more inclined to stick to the Heart and Brain books, there’s a lot of merit to reading this bundle of comics that Seluk has put together. And I can say, without question, that I’ll be eagerly looking forward to the next installment he comes out with.

I was provided a free copy of this book via NetGalley in exchange for an honest review.