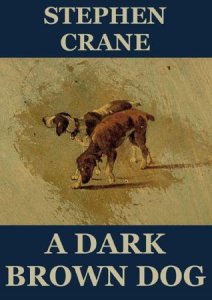 A Dark Brown Dog by Stephen Crane is a story filled with a whole lot of yikes. An allegorical story about the relationship between freed slaves of the Jim Crow era and their previous white captors as well as the disturbing racism that occurred as a result of those aforementioned laws, this short story is admittedly quite difficult to read. It is not lost on me, either, that the author is a white man nor that the majority of people who’ve reviewed thus far, including myself, are also white. Quite frankly, I am unsure how I feel about any of this.

Put simply, this story is about abuse.

When the dog and the child first meet, the child is kind to the dog while he finds him entertaining but quickly turns to hitting him without any provocation once he’s grown bored. For some reason, the dog decides to follow the child home, I imagine somehow pushing this idea that the poor thing developed some kind of attachment to the sometimes kind abuser. And while the dog is soon accepted into the family, it is clear that many members see him as less and have no qualms whatsoever about physically hurting him. The child does somewhat clean up his act and cease abusing the dog.

Then, one day, the child’s drunk father decides to throw the dog out the window.

Why was this level of graphic violence necessary?

I don’t know if I can honestly say that it was. Knowing the historical context of the short tale, I feel even more uncomfortable with the story. And perhaps that is, ultimately, the point. Perhaps this story is meant to shed light on the horrible traumas that African Americans alive in that time period were subjected to. Perhaps this story was meant to call out those disgusting people who acted in the ways of the child and the father.

And in a way, that’s genuinely good.

At the same time, though, I feel as though the comparison of freed slaves to dogs and the portrayed comparison to an animal that often develops blind faith connections to others was kind of wrong. It really bugged me, leaving me unsure how to take this story and whatever merits it may or may not have.

So, was the level of violence the dog faced necessary? Perhaps? It’s the sort of shocking thing that you kind of expect to really hit home hard for people. And it does. Then to bring in the comparison immediately after, to point out that how we feel when we think of these things happening to an innocent dog should be exactly what the white racists should have felt when they realized that the same treatment was being given to real and innocent people is important.

For the time period, it’s kind of impressive.

Did this story improve things?

I honestly couldn’t say. But I like to hope that the horror and shock over the events of what happened to the poor dog translated for some people so that they could recognize the disgusting things happening around them every day. This story makes me deeply uncomfortable and I hope that it made people uncomfortable back then. Of course, I do think A Dark Brown Dog has its problems.