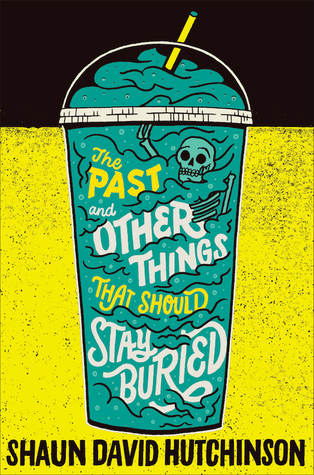 I’m going to tell you all right now that I am noping the hell out of reading The Past and Other Things that Should Stay Buried by Shaun David Hutchinson. Which, frankly, is a real damn shame because that title sounds utterly brilliant. But, unfortunately, I just can’t. I really can’t. And it’s not because there’s anything wrong with the book, exactly. In fact, this book sounds creative and wonderful and I applaud it for that. But I don’t do books about funeral homes. I just cannot. Dead things, in this sense, seriously bother me. There’s a reason why I don’t spend my time reading murder mysteries or crime fiction very often and that has a lot to do with it. I’m not big on death and I’m 10000000% not big on dead bodies. So, you gotta convince me to read that sort of stuff. I had to read a little bit about embalming once for a class and I nearly vomited. It was literally as many words long as it was too much for my level of comfort.

The Past and Other Things that Should Stay Buried is a book about a dead girl who comes back to life…but she’s not really alive, she’s just not really dead and the boy whose parents own the funeral home where she begins talking again. They are apparently best friends or ex-best friends and there’s something to be said for figuring out what went wrong with their friendship and basically July is coming back to resolve any unfinished business, just not as a ghost. I’d probably read the book if she were a ghost. But I’m not one for dead bodies. So, there you go.

What are your thoughts on this book? Are you into this type of thing more than me? Is it something you think you’ll read? Or are you going to nope it like I did? Let me know in the comments!