I do not “boss.” I advise decisively.

And my advice is that you pick up the Wires and Nerve series, a continuation of The Lunar Chronicles in the form of graphic novels the next time you get the chance. There’s almost nothing a reader enjoys more than a continuation of a series they love. I was thrilled when I learned that Marissa Meyer would be writing more in this world and featuring all the original characters, to boot! So, naturally, I had to pick up Wires and Nerve Volume 2: Gone Rogue the moment it came out. I read through these books rather quickly, which truthfully isn’t too hard. I’d consider these rainy day books because you can read the whole series in one sitting and feel pretty good about it. Gone Rogue picks up right where Wires and Nerve leaves off, with Iko and Kinney, quickly transitioning to feature a bit more of Scarlet and Wolf than we got to see in the previous volume. 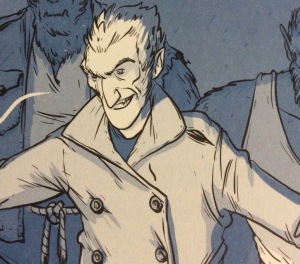 Still facing the threat of Alpha Steele, an angry ex-Lunar operative who intends to wreak pain and havoc across the globe unless newly crowned Queen Selene (Cinder) consents to reverse the genetic modifications that he was forced to have done under Queen Levana. And naturally, despite the understandable emotion Steele feels in this case, it is rather difficult to negotiate with someone when what they want is impossible.

I really enjoyed Gone Rogue and couldn’t have been more thrilled to get the chance to read it. While this one certainly had less of Cress and Thorne than I would have liked (what can I say? I’m a bit obsessed), it was certainly not lacking in wonderful (and squeeful) moments with the characters we all know and love. Now, I’ll be the first to admit that the graphics are not my favorite. I certainly pictured all the characters differently and I do feel a small disconnect when reading them in a graphic novel. But at the end of the day, it is the story and the characters themselves that matter to me most and Meyer does not disappoint.

The book is filled with emotinoal scenes from the kind that make you squeak with excitement to the moments that make you tear up. The characters’ personalities shine through quite strongly and it is very easy to feel yourself pulled back to that world. If for nothing else, the feeling of returning to Meyer’s futuristic setting is one of the most enjoyable ones I’ve had all year and I am so glad to have gotten the chance.

I have absolutely no complaints. Though I wouldn’t be opposed to Meyer returning to all the amazing characters of The Lunar Chronicles at some point in the future.