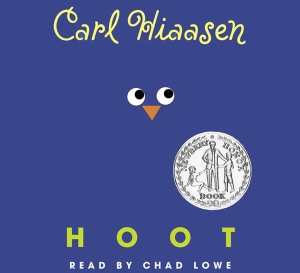 It’s always interesting to read a book after having already seen the movie. No matter what, you always find yourself wondering which one was done best. When it comes to Hoot, I find that I’m honestly in a place where I don’t quite know which one impressed me most. It was several years after I first saw the movie (which I adored) before I actually got my hands on a copy of this book.

In a way, I’ve gotten rather good at determining why something might have been cut out of the movie adaptation–whether I agree with it or not–and there were many things I noticed in this book that had not made it into the movie that just made sense. This is rare for me, especially when I notice things I desperately wanted to see in the film that just didn’t make the cut.

All in all, it was a pretty good book. I truly don’t have many complaints. As I grew closer and closer to the end, I found myself feeling as though I just wasn’t getting there fast enough. At this point in time, I am unsure whether that’s because I decided to watch the movie and read the book together and that led me to compare the fast pace of the movie to the slowness the book expressed due to the extra scenes which did not make it into the film or if it is simply because the book dragged a bit.

I will say, however, that I was sorely disappointed with Mullet Fingers’ true name. Here I agree wholeheartedly with the decision the filmmakers made in leaving him with just his nickname. The name he was given was incredibly disappointing and I personally don’t think it fit him well at all. It took something away from the book that I found myself missing quite a bit. I rather enjoyed the filmmaker’s decision never to really give him a real name and it felt incredibly anticlimactic to learn it in the book.